UTILITIES CUT POWER TO PREVENT WILDFIRES. BUT WHO WINS WHEN THE LIGHTS GO OUT?

LOS ANGELES — With devastating wildfires becoming more frequent in California, power companies have found themselves on the defensive. Their equipment has been singled out as a frequent culprit. Now, to reduce the hazard, they are pulling out a rarely used tool: the blackout.

Power for tens of thousands of Northern Californians was cut Sunday as high winds prompted fire alerts in a region hit hard by fires a year ago — including parts of Napa and Sonoma Counties, the state’s leading wine area.

The action was taken by Pacific Gas and Electric, whose territory covers most of central and Northern California. PG&E and Southern California Edison warned tens of thousands of others that they, too, could face imminent blackouts.

Officials said they were acting purely for safety reasons. “We’ve always had this as a tool,” said Phil Herrington, senior vice president for transmission and distribution at Southern California Edison. “Based on our experience, based on our view, the wildfire threat is increasing.”

But liability for wildfires has been an increasing concern for the companies and their shareholders — and consumer groups questioned whether the blackouts were an overstep meant to insulate the utilities.

Wildfire liability was one of the biggest issues in the State Legislature this year. With power lines and poles blamed for fires that caused billions of dollars in damage in 2017 alone, there was concern that at least one of the utilities might file for bankruptcy

Lawmakers passed a measure that included funding to reduce the risk of fires as well as provisions to keep Pacific Gas and Electric financially afloat. But the bill still left the utilities open to liability.

The bond ratings of all three of the state’s investor-owned utilities were downgraded last month by Moody’s Investors Service because of financial risk related to wildfires.

Some consumer advocates contended that by resorting to blackouts, the utilities were going to extremes to protect themselves. Blackouts or even the fear of them, the advocates argue, gives the utilities leverage in further efforts to get the state to indemnify them.

“When the utilities don’t get what they want, they start turning the power off,” said Jamie Court, president of Consumer Watchdog, an advocacy group active on a range of issues. “They were disappointed in the Legislature. They clearly want more. They want no liability.”

Mindy Spatt, a spokeswoman for the Utility Reform Network, which represents consumers before California regulators, said her organization worried about the companies’ broad authority to cut people’s power.

“It’s always scary to consumers to trust them with a such a life-and-death issue,” Ms. Spatt said.

Wildfires have moved from a seasonal event to a year-round occurrence. State law allows the utilities to cut power to customers whenever there is a risk to public safety.

“The change in weather patterns that we’re seeing, we have to look at everything in a new light,” Mr. Herrington said. “It is something that truly is a last resort for us.” 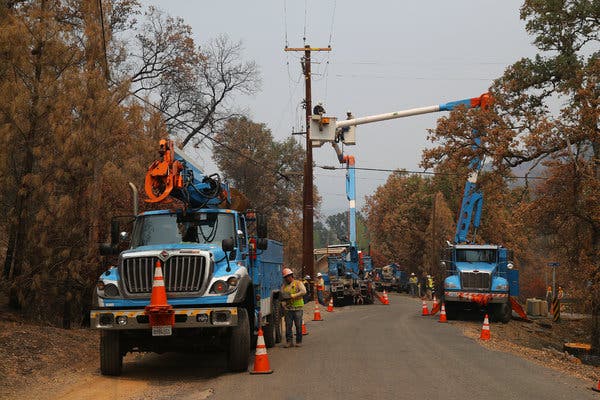 Southern California Edison used blackouts in wildfire prevention in 2003 and again in 2017 in the Idyllwild area of Riverside County. It warned 130,000 customers over the weekend that they could face blackouts in the face of increasing Santa Ana winds — a longtime autumn scourge, blowing hot, arid gusts from inland deserts toward brush and woodland.

San Diego Gas and Electric became the most frequent user of the strategy after a series of fires in 2007 killed 10 people and destroyed hundreds of homes. Since 2013, the utility has cut service 19 times to customers. On Sunday and Monday, 4,000 of its customers received warnings of possible blackouts, though just 360 lost power.

The Southern California hazard is acute after an unusually dry 12 months. The National Weather Service reported “critical fire weather conditions” in a wide swath of Southern California on Tuesday, with wind gusts exceeding 50 miles an hour in some mountain areas.

But the biggest threat over the weekend was in the north, also enduring a drought, as winds there picked up.

All told, 60,000 customers lost power in Pacific Gas and Electric’s service area on Sunday night. It was the first time PG&E had taken the step for fire prevention. An additional 37,000 customers received warnings.

PG&E said it expected all those affected by the blackout to have power by Tuesday night.

The utilities said that before imposing a blackout, they assessed wind speeds, temperature, humidity, vegetation and other factors. They also work with emergency personnel and other state authorities when deciding to disrupt service.

With the increasing threat of wildfires, “we are taking additional action across our service area to constantly assess and evolve and adapt,” said Melissa Subbotin, a spokeswoman for Pacific Gas and Electric.

The impact was felt not just in darkened homes but also in disrupted routines.

Ed Manansala, the school superintendent in El Dorado County, east of Sacramento, said his county received notice of planned blackouts on Saturday and began working with PG&E to figure out which of 15 school districts would be affected so parents could be notified. The blackouts forced 10 districts in the county, with 34 schools, to close on Monday. They reopened Tuesday.

“Absolutely, there’s a rippling effect,” said Mr. Manansala, who said other superintendents had told him that they, too, were scrambling to cope with the blackouts. “We are dealing with a delicate balance with safety and prevention.”

Bill Powers, a San Diego engineer who serves as an expert witness on behalf of consumers before California regulators and across the nation, said he was concerned about the utilities’ use of the rolling blackouts.

Mr. Powers noted in a report for the Sierra Club in March that use of the policy limited utility liability in conditions of high fire danger while leaving customers vulnerable to losing critical water pumps, life-support systems and refrigeration for food.

“These are not act-of-God situations,” Mr. Powers said in an interview, but instead reflect the utilities’ concern about liability.

Mr. Court of Consumer Watchdog said his organization planned to request a hearing about the use of service interruptions related to wildfires. Although state law permits utilities to shut off power for public safety, there is no explicit provision for doing so to head off wildfires.

“They have a legal duty as a regulated monopoly to provide power,” Mr. Court said. “Why do we need them if they don’t keep the lights on?”

The California Public Utilities Commission said it routinely conducted reviews after utilities cut customers’ power, and would consider the factors that led to Pacific Gas and Electric’s decision.