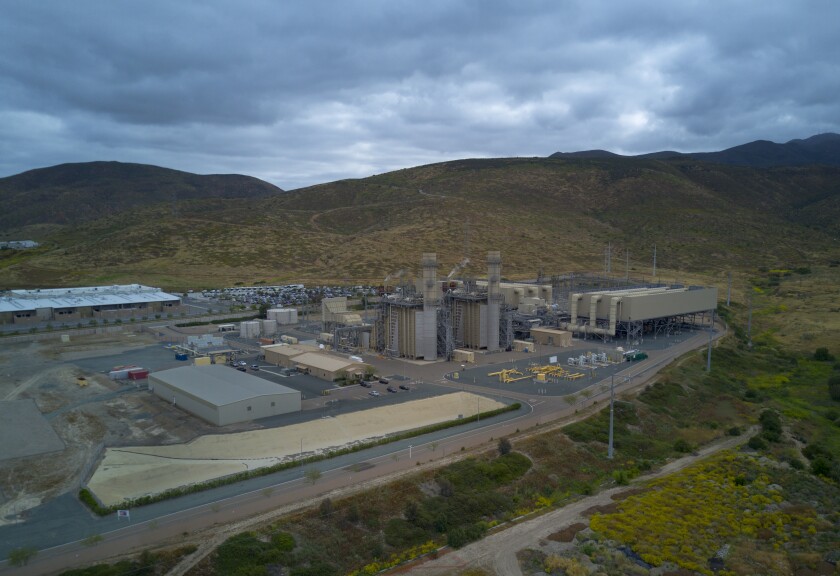 Instead, the utility signs a 59-month power purchase contract with Texas-based Calpine

San Diego Gas & Electric will not have to pay $280 million to take over the 608-megawatt Otay Mesa Energy Center natural gas power plant as part of a complicated and controversial agreement signed 10 years ago by the plant’s current owner, Houston-based Calpine.

Early Tuesday evening, an official at Calpine confirmed to the Union-Tribune that the company has accepted a 59-month power purchase agreement with SDG&E that will see Calpine employees continuing to operate the facility located in the foothills near Chula Vista that delivers electricity to utility customers.

The original agreement signed in 2009 is set to expire Wednesday and the 59-month deal will go into effect Thursday when the original 10-year agreement expires.

Citing a California Public Utilities Commission, or CPUC, order from August, Calpine spokesman Brett Kerr said in an email, “I can confirm that Calpine has decided to proceed with a power purchase/resource adequacy agreement (with SDG&E) and no transfer of ownership is required/anticipated.”

For the past month, Calpine did not respond to multiple requests from the Union-Tribune asking the company to verify the agreement that SDG&E officials reported to the commission in filings.

The Calpine email represented the latest wrinkle in a story involving the power plant whose construction was steeped in intrigue that centered on a former president of the California Public Utilities Commission and has now turned into a debate among SDG&E, Calpine and a local environmental organization that believes both the 59-month and $280 million options for the Otay Mesa Energy Center, called OMEC, are unfair to ratepayers.

In 2003, Michael Peevey was president of the California Public Utilities Commission, or the CPUC, and the state was climbing from the wreckage from rolling blackouts experienced during the California energy crisis in 2000 and 2001.

At the time, SDG&E wanted to buy the Palomar Energy Center, a natural gas-fired power plant in Escondido, to bolster grid reliability. The power plant was owned by a subsidiary of Sempra Energy, the parent company of SDG&E.

SDG&E ended up acquiring Palomar, as well as buying power from the soon-to-be-constructed OMEC facility.

Years later, a utilities sector attorney said before a state Senate committee and in a letter to the director of a consumer group that Peevey engineered a deal in a conference call that included representatives of the CPUC, SDG&E and Calpine.

Peevey said “if SDG&E wanted to buy Palomar from its affiliate, SDG&E would also need to make a deal with Calpine for Otay Mesa,” attorney Kelly Foley said in a 2015 letter to The Utility Reform Network. “If SDG&E did not reach an agreement with Calpine, the CPUC, based on utility affiliate transaction concerns, would not approve the proposal to acquire Palomar.”

In June 2004, the CPUC approved the deal on a 3-2 vote, with Peevey voting with the majority.

Now retired, the 81-year-old Peevey when contacted by the Union-Tribune earlier this year, said, “I can hardly remember a damn thing” about the transaction.

“I just tell you flatly I don’t remember that at all,” he said in a telephone interview. “I’m not saying we didn’t have such a phone call … We wanted those power plants built because it looked like there was going to be a shortage of power in San Diego. It didn’t turn out that way but there was certainly no quid pro quo or anything of that type involved, to the best of my memory.”

Under the terms of the contract, SDG&E agreed to a 10-year power purchase agreement with Calpine’s OMEC subsidiary that went into effect when the natural gas plant opened in 2009.

In addition, an unusual provision was included: A put-call option between Calpine and SDG&E. Under the terms of the “put,” Calpine has the right to force SDG&E to buy OMEC for $280 million once the contract expired in the fall of 2019.

Even though California policymakers want to reduce dependence on natural gas in order to move to the state’s goal to derive 100 percent of its electricity from non-fossil fuel sources, analysts from the CPUC and the California System Operator, which oversees the grid for about 80 percent of the state’s electricity customers, determined power from OMEC will be needed over the next five years.

But SDG&E was hardly eager to put up $280 million to own the plant. Instead, it reached an agreement with Calpine to sign a 59-month power purchase agreement that would see the Houston-based company still own and operate OMEC.

On a 3-2 vote in February, the CPUC approved the 59-month agreement.

But Powers and Protect Our Communities filed for a rehearing, arguing that OMEC is “an additional, totally unnecessary burden” on ratepayers as more customers join community choice aggregation, or CCA, energy programs. Under the CCA model, local governments purchase the sources of power (wind, solar, natural gas, etc.) instead of traditional utilities such as SDG&E and promise to buy more renewables.

Not necessarily, Powers says. Under the CPUC rules, contracts between utilities and power generators remain confidential for three years. Powers suspects that after all the payments from the five-year deal are completed, the price tag may be just as expensive as buying the plant outright.

But when Powers filed for rehearing this spring, Calpine exercised the “put” option that would force SDG&E to buy the plant for $280 million. The company, however, left the door open to accept the 59-month agreement instead.

In August, the CPUC rejected the appeal from Powers and the Protect Our Communities Foundation for a rehearing. “We have reviewed each and every argument raised in the application for rehearing and are of the opinion that good cause has not been established to grant rehearing,” said the decision signed by all five commissioners.

Where we’re at now

SDG&E said the denial for a rehearing closed the book and confirmed that the 59-month power purchase agreement with Calpine will stand and SDG&E will not be forced to buy the plant for $280 million.

Furthermore, the debate over OMEC was mentioned as part of a detailed, 755-page SDG&E general rate case the CPUC signed off on last week. In it, SDG&E informed the CPUC that Calpine’s subsidiary operating the plant has “agreed to rescind” the “put” option and SDG&E will proceed with the 59-month power purchase agreement “and will not purchase the OMEC facility.”

However, Calpine had not verified this to the Union-Tribune until Tuesday evening.

In the meantime, Powers said his group will fight on. Protect Our Communities has already filed a case with a state appeals court in San Diego, asking for the court to force the CPUC to take another look.

“We want this booted back as an application to the commission,” Powers said. “We want a full evidentiary, detailed process … We’re saying, look, this didn’t get the sunlight at the commission that it should’ve gotten.”

Powers said he expects to hear whether the appeals court will take the case by the end of the year.

As for the 59-month contract, it goes into effect Thursday and runs through August 2024.

Updates:
8:28 PM, Oct. 01, 2019: This story has been updated to show that Calpine has confirmed the 59-month contract will go into effect Thursday.
https://www.sandiegouniontribune.com/business/energy-green/story/2019-10-01/sdg-e-says-it-will-not-have-to-buy-the-otay-mesa-energy-center-for-280-million