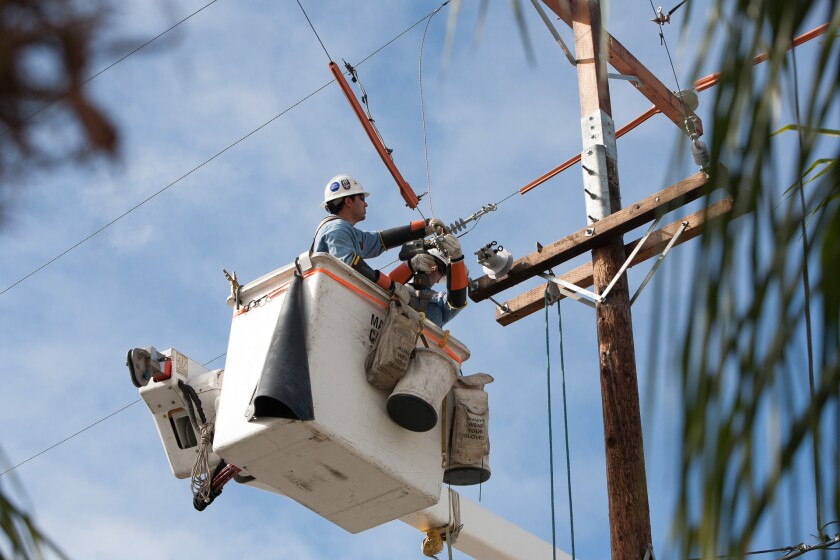 Deal signed in 1970 with SDG&E about to expire

For the first time in nearly half a century, the city of San Diego is preparing to renegotiate a franchise agreement that gives San Diego Gas & Electric the exclusive right to use the city’s public right-of-ways for transmission and distribution, and to install wires, poles, power lines and underground gas and electric lines.

And amid a rapidly changing energy landscape, that means some big changes may be in store for customers, the city and SDG&E — the 138-year-old company that is seeing its reign as the region’s power monopoly go through major challenges.

In exchange for transmission and distribution privileges within the city limits, SDG&E pays a franchise fee of about 3 percent that comes from the company’s gross revenue earned from electricity and natural gas sales to customers that is paid to the city. About half the money is directly charged to customers on their monthly SDG&E bill. The other half comes from a fee that is listed as an operating expense for the utility.

And it’s a sizable amount of money.

The city anticipates $68.1 million in franchise fee revenue in the upcoming fiscal year — $51.1 million going to the city’s general fund and $17 million deposited into the Environmental Growth Funds.

Separately, the city also expects to receive $63.8 million in the 2020 fiscal year from a surcharge collected to pay for placing SDG&E lines underground across the city.

In an indication of how serious the city is taking the renegotiation, the San Diego City Council last month approved the hiring of a pair of consulting groups for nearly $1 million to help advise the city how to bargain for the best deal.

“We know what (the city’s) focus areas are as it relates to this,” said Eugene “Mitch” Mitchell, SDG&E’s vice president of state governmental and external affairs. “One is going to look at the value of the grid that we operate in the city and the other is going to focus on the specific terms of the franchise agreement and we look forward to those conversations.”

But the city is hoping SDG&E will not be the only potential partner at the bargaining table.

“It is not outside the realm of possibility that another utility, whether it’s one that operates in California today or one that may be thinking about having an opportunity of operating in California, could submit a response to our solicitation later this year and respond,” Caldwell said.

City staffers look to submit a request for proposal, or RFP, that would attract other suitors to compete for the franchise agreement.

SDG&E officials plan to negotiate with the city on an extension.

“There are elements of the franchise that need to be modernized and those conversations between the city, the mayor (Kevin Faulconer) and the city council will continue and we are excited about” the prospects, Mitchell said in a recent interview.

Regardless where talks go and how many potential partners come forth, don’t expect to see another agreement that lasts 50 years.

While some cities in California grant utility franchises in perpetuity, San Diego is one of a relatively small group that has an end-date to its franchise agreement.

Among those cities that renegotiate their franchise agreements, the trend is to sign shorter-term contracts.

Mitchell said SDG&E is looking to sign a 25-year extension. Caldwell was non-committal, saying, “That remains to be seen.”

What about adjusting the 3 percent rate in the existing franchise fee?

“That’s also something that we’re looking at as well,” Caldwell said, adding that the city wants to use the negotiations as a opportunity to look for reductions in energy costs for residents and businesses.

Mitchell said “there are areas of great opportunity” between the city and SDG&E but added, “for the most part, we are in a listening mode to find out exactly what the city believes is important … and how we can help them achieve those objectives.”

In the meantime, San Diego hired a pair of consulting groups to help the city determine just what the franchise agreement is actually worth.

NewGen Strategies & Solutions, a Texas-based utilities management consultant, signed a $331,735 agreement along with two sub-consultants to look at the value of the infrastructure that exists in the city’s right of way. “I think of it, in many respects, as a very complicated Zillow estimate of what that infrastructure is worth,” Caldwell said.

JVJ Pacific Consulting received a $593,000 contract to act as the city’s strategic consultant to help determine what the city should ask from SDG&E while also assisting in writing an RFP that can be attractive to other potential bidders. The company has assigned former PG&E general counsel Howard Golub as the city’s lead.

That’s a lot of money but Caldwell said it’s necessary because it’s difficult to understand how franchise fees should be structured — especially given the changes in the energy and utilities sectors in recent years. Among them:

As negotiations are about to start, the city of San Diego and SDG&E are embroiled in a dispute.

Pure Water San Diego is the city’s $1.4 billion multi-year water recycling project to provide one-third of San Diego’s water supply locally by 2035. The city says it has spent almost $2 million to move its lines around SDG&E’s existing infrastructure. The city says three other projects totaling $1.6 million cannot be worked around and the city wants SDG&E to pick up the tab but the utility disagrees.

SDG&E says it does not believe “the high costs” of the water project should be spread among all customers in its service territory that includes San Diego and parts of Orange counties.

“Many of our customers would not benefit from this project and they should not bear the burden of the cost,” SDG&E spokesman Wes Jones said.

The city argues that it’s “clearly defined” that in cases of upgrades to city-owned water and road infrastructure, the utility should have to move its infrastructure to make way for the city. SDG&E counters that “it is established case law in California that utilities are not obligated to pay for relocations to accommodate municipal water projects.”

The disagreement may end up in court. In the meantime, the city has paid SDG&E $36 million to design the relocation of its utility infrastructure for the project. The payments were made under protest, with the city reserving the right to seek a legal remedy later.

The Voice of San Diego has estimated the dispute could add $48 million to the cost of the project.

It makes for an awkward situation — the city and SDG&E arguing over the water project while trying to work out a new franchise agreement at the same time.

“It’s unusual and unexpected for an entity that is seeking an additional extension of their franchise relationship to not live up to the terms of the current franchise agreement,” Caldwell said.

SDG&E’s Jones said the utility and the city “have been able to make significant progress on the Pure Water project despite our disagreement on cost responsibility.”

Under the San Diego city charter, the city can pursue what it’s doing now — and look for an entity to provide electric and gas service. But it also has another option — it can provide the service itself. That’s called “municipalization.”

“We’re looking at all possible options,” Caldwell said, but in the same breath said if Faulconer and the city council wanted to move in that direction, “It will require us to engage in a whole different type of analysis … Our hope, as of this moment, is that we find either through SDG&E or some other respondent to the RFP an entity that’s willing to provide those services.”

Last month, city officials in San Francisco offered to buy San Francisco’s entire electric grid from Pacific Gas & Electric for $2.5 billion. PG&E, which is going through bankruptcy proceedings, does not seem interested in the deal but San Francisco officials believe they can provide power that is more reliable, safer and cost-effective than the utility.

Here in San Diego, a number of local groups are watching the developments in the franchise agreement closely.

“This is once-in-a-generation opportunity for the city of San Diego to enact some changes to the franchise agreement,” said Tyson Siegele, energy analyst for the Protect Our Communities Foundation, an environmental group.

Siegele said the city, through changes in the agreement, can call on the franchisee to boost development for a host of programs, ranging from solar to microgrids. Changes, he said, can also be made to the franchise fee that could shift costs from ratepayers to utility shareholders, as well as aligning the city’s Climate Action Plan to the agreement.

“We as a city should be thinking, what is a 21st century franchise agreement versus an agreement that was written 50 years ago,” Siegele said.

Working with the mayor’s office, city staffers plan to release the RFP to the public in February, start reviewing and evaluating responses in May and finalize the language to put a proposed agreement before the San Diego City Council for a vote by August.

Caldwell called the time line “aggressive” and said staff and Faulconer’s office want to make sure the proposal doesn’t have “anything in the document that is a non-starter from the business sense of any reasonable and rational utility.” At the same time, they also want to make sure the agreement is aligned with the wishes of the city council, which has final say on any deal.

Approval of a new franchise agreement will require a two-thirds super majority from the city council.

And any modifications of the franchise fees would require a review from the California Public Utilities Commission.